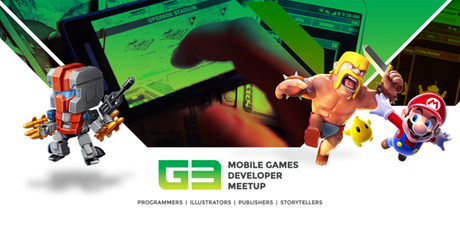 The G3 Mobile Games Developers Meetup is a monthly convergence of players in the local games space to foster conversations related to games and game development in Nigeria. The monthly line up usually includes:
A new product showcase
Gaming challenge
Video learning. My favourite!
Free drinks. My second favourite!
And networking

I've been delighted to have sailed with the boat from the very first edition in April. So far,
there have been cameo appearances of major players, interesting talks, and debates that stretch
as long as the Nile. So If you missed it thus far, this is my personal review on how the
previous meetups have gone. Note this is not an extensive review.

Review: Guessing the no theme was due to it being the first event. But something like "Welcome" or "Introduction" would've been fine. There was a new game showcase by Maliyo called Math Rush Challenge. You can check it out here. The Video learning segment was a presentation about "How to Almost Bankrupt Your Game Company" by Brandon Sheffield at the recently concluded GDC 2016 conference. Really important if you're thinking or in the process of starting out an indie company. You'd even get some useful tips if you're a free lancer like me. Watch it here.


Theme: Analytics and Monetization; looking at the numbers and exploring recent data

Review: The new game showcase by Maliyo was Color Code. You can check out a review for the game by Techpoint here. The gaming challenge was won by the same guy last month. Apologies for not writing anything about it, but I secretly think he works for Maliyo. There was a display of the Top Mobile Gaming Charts with relation to local developers but I don't believe it represented the whole of Nigeria; the data represented was exclusive to the Etisalat app store. See chart here. There was yet another insightful GDC talk titled "Awesome Video Game Data" by Geoferry Zatkin. He covers every pattern and trend from next generation consoles to mobile. Sadly I'm unable to post a link of the video but you can read the detailed PDF file here.

No meetup happened in June.

Review: The theme wasn't really "Let Us Play" like they said but was more of "Applying Gaming
Techniques to Shape Our Reality" and this awesome TEDTalk titled "Gaming can make a Better World" by Jane McGonigal did the trick. She talked about 4 super-abilities gamers have and I believe it can be an eye opener for those folks who think gaming has no value at all (like they were even there). You can watch it here. Liked the discussion session and open floor barrage of criticisms of popular Nigerian gaming companies, something one of the co-founders of Chopup seemed to have a dislike to. Finally the new game showcase by Maliyo was Kidnapped. You can check it out here.

Review: Another one that just drifts away from the theme. I'm not too sure about that because I use the video leaning segment to cross-check the theme of the month, so I might be wrong. This is due to the fact that I've been about 30-45 mins late for the last 2 editions (this and last month) and might have missed the opening segment. So the new game showcase by Maliyo was Aboki. You can check it out here. The video learning segment was a Google I/O 2016 conference titled "Building for Billions on Android". Now, this has no direct correlation with gaming; since Android isn't the only gaming platform available. The only reason I think this was presented was because about 80% of the guest list were from Google (remaining 20% from Mozilla and Opera). At least the video provided useful tips for developers building apps regardless of platform. You can watch the video here.


All in all, it has been progressively okay. The meetup does promote interaction between players in the local industry. I've even been acquainted with some interesting folks, most notably the president of IGDA Nigeria. But come to think of it, I never noticed the "Mobile" in the header. Really, does that mean it's strictly mobile???